Each side has nine pieces and one Bien piece, originally arranged on the chessboard as shown in Figure 3.1.
* In the geometric chess, when placing a piece in a small square, we understand that the center of the chess piece always coincides with the center of the square.
The center of each square always exists but it is only determined when there is a piece in that square.
* In the standard geometric chess, most chess pieces have no fixed "geometric value" that they have a highly customizable character.
* After performing a certain move, the chess player has the right to choose the appropriate "geometric values" to assign to the chess pieces (both its pieces and the competitor’s pieces) in order to reach a target as given. Chess players can choose different values ​​to assign to each chess piece. These temporary "values" only exist momentarily, when the competitor moves to the new move, they have the right to change the appropriate values ​​according to the specific conditions of layout. 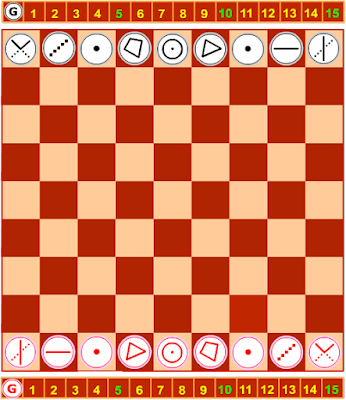 Fig 3.1: Layout of chess pieces on the standard geometric chess board


a. Point Piece: Point piece has a circular symbol in the middle of the chess piece, representing a point on the chess board, and the point also coincides with the center point of Point piece. Each side has 2 Point pieces.

Initially, piece G displays a G-shape, when one side wins a match, its  piece G is flipped over to show the star. Therefore, piece G just recognizes the score for the side which wins in the matches. Each side has an edge piece.

In the standard geometric chess, the scoring cases include: Straight, straight, triangular, square and circular.

* Only consider the points for the side which has just done the move.
* A geometric form that is considered valid and scored for the side that has just ended the move must have the following characteristics:

+ The chess pieces for layout must consist of pieces of both sides and the number of pieces of the side making the late move must be greater than or equal to that of the competitor.
+ All angles, edges, vertices (if any) of each participating piece must be fully incorporated into the formation of that shape.
Geometric shapes formed by the chess pieces must follow logical logic.
+ Angles, edges, lines should not overlap

* To make it easy to see, the illustrations in the next section refer only to the pieces involved in the puzzle and ignore the remaining chess pieces on the chess board.

A straight line segment is created when there are at least 3 pieces on either a horizontal line or a vertical line or a diagonal line of the board and they form a geometrical line in which the distance between two chess pieces consecutive is always equal.

* Figure 3.2 illustrates a number of straight-line sequences consisting of 3 pieces. 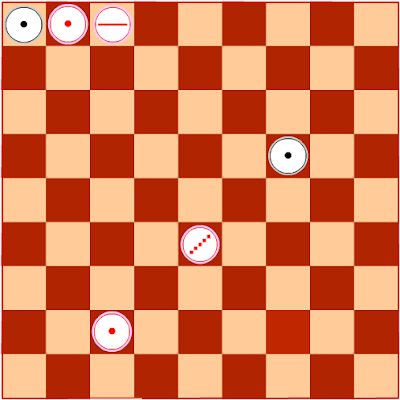 + Straight section as mentioned below 3.2 is made up of one Cross piece and two Point pieces. The chess piece in the middle of two pieces remains two times the diagonal of the square. This is a straight line on the diagonal axis, therefore, it is impossible to replace the Cross piece with the Axis piece.
- It is supposed the red party has made the last move to make a straight line as shown in Figure 3.2. And also, the number of red pieces is 2 and the number of black pieces is 1 (that is, red number is bigger than black number). Then the red side will be added 1 point.
- If the black side finishes the last move and creates a straight line as in Figure 3.2, the black side is not scored (because the black number is less than the red number) and the red side has no points.

* Figure 3.3 illustrates some cases where a straight line segmentation is valid. 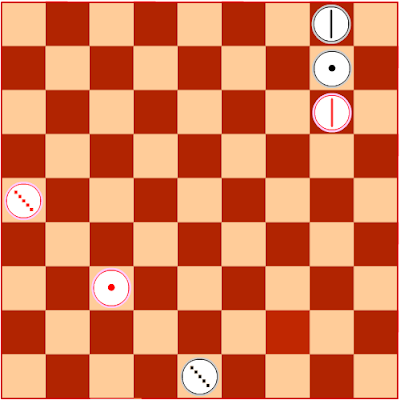 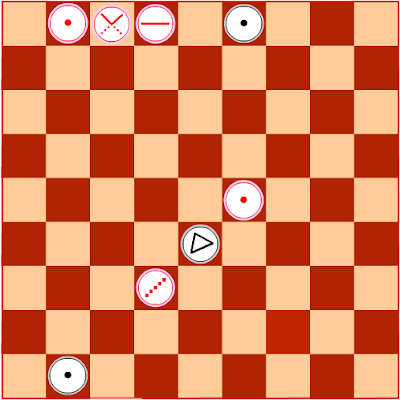 Fig 3.4: "Stop piece" in the case of straight line with equal distance

* Figure 3.5 illustrates two straight lines of four chess pieces. When a straight line is drawn with 4 or more pieces, 2 points are counted. 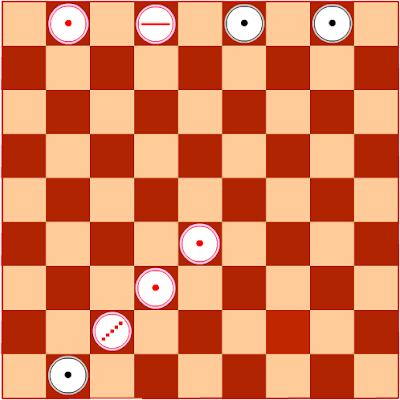 + Straight section as mentioned Figure 3.5 with the number of chess pieces on both sides is equal to 2, therefore, any side making the last move created is also considered valid and added two points.
+ The straight line is mentioned in below the figure 3.5 with red number is 3 and the number of black pieces is 1: if this line is made by the red side, it is calculated 2 points, if the black side making the last move created, neither side has extra points.

Triangle is a shape with 3 vertices and 3 edges. In the geometric chess, a triangle is considered valid when at each vertex there must be a positioning chess piece and the pieces must create three sides of the triangle, the sides of the triangle must lie on the horizontal axis, the vertical axis or diagonal of the chessboard.
* There are many ways to arrange a valid triangle. Figure 3.6 illustrates how two triangles are valid. 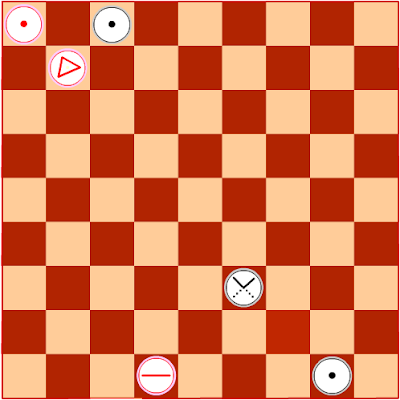 + The triangle as mentioned in Figure 3.6 is made up of one Square, one Axis, and one Point piece. This is a square triangle with two sides created by the Square piece and the bottom is located on the horizontal axis formed by the Axis piece, Point piece only acts as a top of the triangle. If the black side has the last move to create this triangle, it will add up to 1 point (because the number of black pieces is more than red pieces). 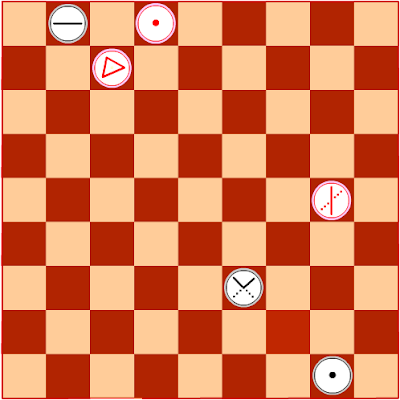 + The triangle as mentioned in Figure 3.7 has three sides created by the Triangular pieces, therefore, the straight line generated by the Axis piece will have to be folded onto one side of the triangle causing the overlapping phenomenon to be considered invalid.
+ The triangle as mentioned in Figure 3.7 has two square edges created by Square piece, Acute piece which creates one bottom and one square edge, thus causing overlapping and invalidation.

* Figure 3.8 illustrates the existence of “Stop piece" when triangulating. 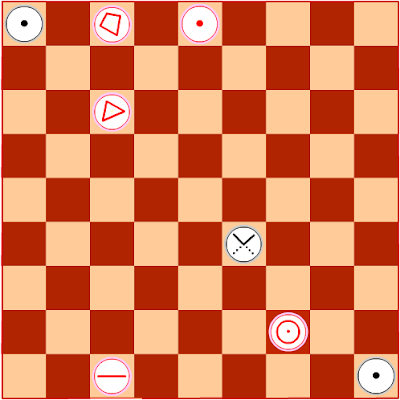 Fig 3.8: "Stop piece" and “non-Stop piece” in the case of triangular layout 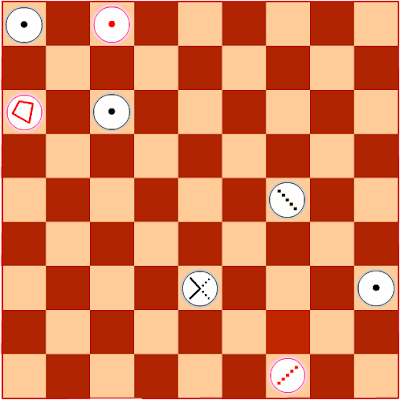 + The square as mentioned above Figure 3.9 is created by a Quartile piece and three Point pieces. Three Point pieces determine the three vertices of the square while the Quartet piece identifies the remaining one and customises the edges of the quadrilateral into the four sides of that square. Since the number of pieces involved in this square is 2, each party making the last move created is also given 2 points.

* Figure 3.10 illustrates the existence of “Stop piece" in the case of square layout. When there is 1 piece, in addition to four pieces that join the square, lying on a certain edge of the square, this square is considered invalid. 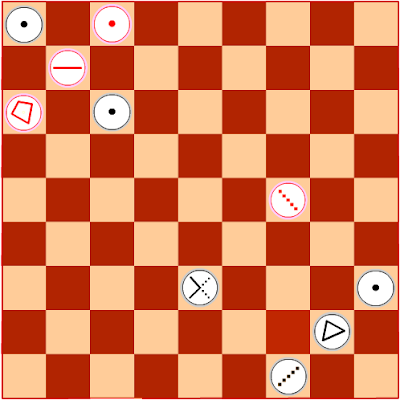 In the geometric chess, a circle is considered valid when the center is identified and at least three points lie on that circle, all of which must have a positioning geometric chess, the Circle must be at the center of the circle, The radius determined by the Round piece and the remainder must lie on the vertical, horizontal or diagonal axis of the chessboard. With the chess pieces present on the chess board, there are only a few combinations to arrange a circle. No other army can replace the Round piece position at the center of the circle. 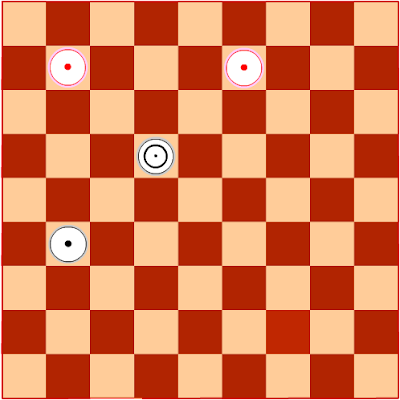 * Figure 3.11 illustrates how to make valid round layout for Round and Three Point pieces. This circle is centered on the Round piece, the radius created by the Round piece and three Point pieces are on the diagonal of the chessboard. The black side or the red side making the last move to create this circle is also added two points (because the number of pieces involved in the formation of two sides are equal) 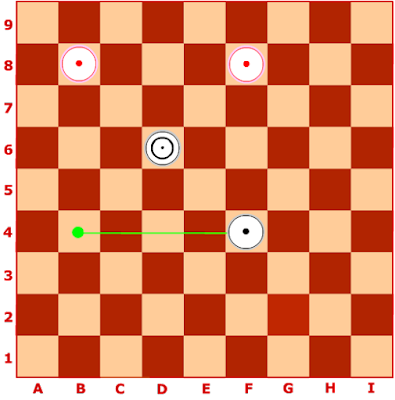 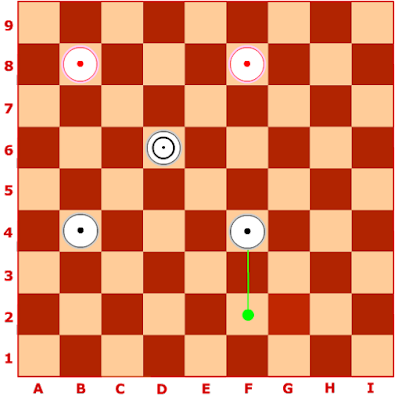 * Figure 3.14 illustrates how to make invalid round layout. Although this is also a round centered at the Round piece and defining four points in the center, the radius created by the Round piece and the Point pieces are not located on the axes of the chess board. 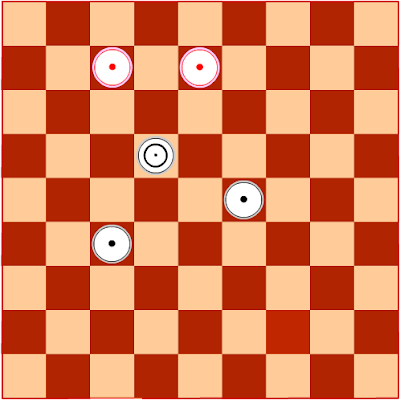 Figure 3.15 illustrates the existence of “Stop piece" in the case of round layout. 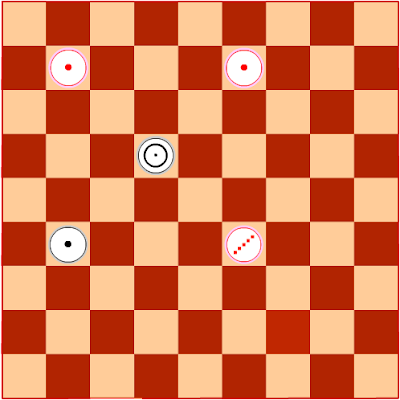 + In Figure 3.15, in addition to three Point pieces, there are other chess pieces - in this case the Cross piece - which are also located in the center of the circle. The Cross piece (or any other piece - aside from Point pieces) is called “Stop piece”.

In many cases, when we move a chess piece to a new location, we can create two or more basic geometric shapes - then we have a polymorphic sort. Thus, the polymorphic layout is a composite of individual shapes.

* When making the polymorphic layout, the maker must follow the following principles:
+ All edges, angles, vertices (if any) of the pieces participating in the layout must be fully involved in the arrangement.
+ Each individual shape, when separated, must be a valid shape following the basic layout principles described in the previous sections.
+ Individual pairs can share one or two pieces together.
+ Score is calculated as the total score of individual shapes.

* An example of a polymorphic layout that shares a chess piece. 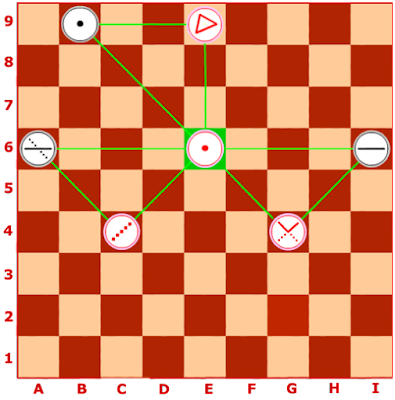 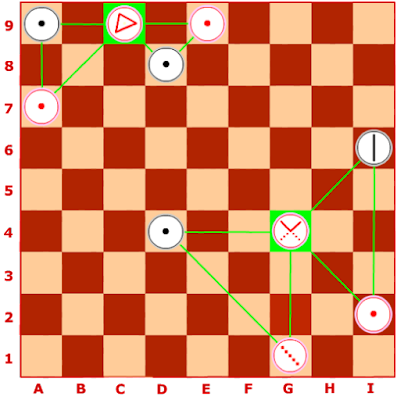 + You pay attention to the Point piece in the red side on Figure 3.18. There is no valid geometry in the E4 position if the red side moves to position E4 to produce three geometrically valid shapes: triangle and square. These single shapes use the same 2 pieces (Point pieces at E1, E4). With this move, the red side is added 4 points (1 point for straight line spacing, 1 point for triangle and 2 points for square). 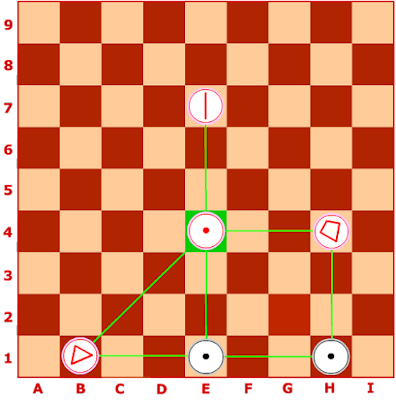 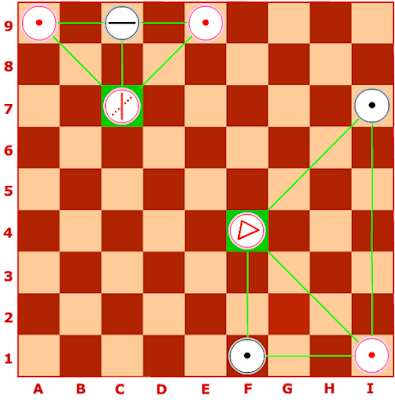